The following column appeared in a number of APG of East Central Minnesota newspapers in February-March, 2020, including the Morrison County Record.

For this former history teacher, it was flawed and frustrating. For a tourist, it was stunning, spectacular and sad. “This” was a recent 10-day cruise through several Caribbean islands. And there was an unexpected plus — discovering 8- and 12-year-old authors in the British West Indies who’ve written books many youngsters will enjoy. 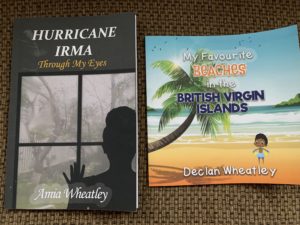 Three family members and I started in Puerto Rico late in January and spent more than a week on a cruise ship that visited several islands, including St. Thomas, Dominica and Tortola in the British Virgin Islands. We saw lush forests, steep hills, stunning beaches and bright flowers. These were terrific treats for Minnesotans in January.

Their mother, Alfreda Gordon-Wheatley, has a Facebook page. She’s willing to ask her children questions other students have. Alfreda, Amia and Declan told me, among other things, that six months passed after the hurricane before electricity returned to their home and beaches fouled by raw sewage were clean enough for swimming and that their Jeep was swept down a hill into bushes, where it still sits.

The rest of the column can be found here