Diesel Heart is Terrific Book for Families to Read Together

Diesel Heart is Terrific Book for Families to Read Together 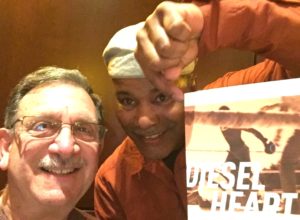 Funny, foreign and fascinating. Those are among the words I’d use to describe a new Minnesota autobiography, “Diesel Heart,” by Melvin Carter Jr. I hope every Minnesota high school uses this book and that Minnesota families consider reading all or part of the book with their youngsters. Published by the Minnesota Historical Society Press, this is one of the most honest, horrifying and hopeful books I’ve ever read.

“Diesel Heart” is a frank account of an African-American man who grew up in St. Paul’s Rondo neighborhood, struggled in school, constantly got into fights, but always was encouraged by his family to “do the right thing” (as movie maker Spike Lee would say). Carter describes many mistakes he made as a teenager and calls this time “my knucklehead days.”

He includes stories that almost everyone will find funny, regardless of where you grew up. For example, he describes the time his 2-year-old son “scooted over and slobbered all over my face, waking me up with baby spit.” Meanwhile his 4-year-old daughter was pushing hard on his chest. He realized that both “had just seen a demonstration at day care (and) were performing CPR on me. Wiping slobber from my face, gasping for breath, I laughed almost to tears.”

Carter describes a community that is simultaneously violent, dangerous and supportive. He writes, “Bare knuckle fist fightin’ was my weapon of choice, my way of takin’ on bullies and makin’ the world a better place.”

Though he ultimately (and to his surprise) graduated from high school, “Sitting in class, waiting for bells to ring, was torture.” After high school, Carter worked briefly for Whirlpool. Then he joined the Navy, fought a lot there and became a St. Paul Police officer.

He explains, “Protecting and defending others now revealed itself to me as my life’s work.” He describes some fellow police as caring and compassionate. He also recalls that some supervisors put his life in danger by failing to send backup. He was able to help some youngsters and families choose the right path, but readily acknowledges that he failed with some.

One of his wisest decisions was to marry a wonderful woman who was elected to the St. Paul Public Schools Board and currently serves on the Ramsey County Board. Their son was elected St. Paul’s mayor in 2017, the first African-American to achieve this honor.

For many Minnesotans, including me, this book reveals a history of 1948-2018 we know little about. The details of life in Rondo, concurrently violent and supportive, are stunning. Carter sometimes uses obscenities, so families reading the book with youngsters may want to read ahead and possibly leave some things out.

The book is horrifying because of many day-to-day details of violence, racism and death.

But it’s one of the most hopeful books I’ve ever read because of the many people who overcame obstacles, Carter’s survival and his decision to give back. After retiring from the Police Department, he’s mentored many young men, often, but not always, successfully.

In the final pages of “Diesel Heart,” Carter describes his deep religious faith. He concludes: “Ain’t no sense in reading this story if you don’t believe in God. But maybe you should read it especially if you don’t.” He believes his life ultimately is a testimony to the power of God. Whatever you believe about God, I think you’ll find this to be a deeply inspiring, humorous and hopeful book.

Joe Nathan can be reached at Joe@centerforschoolchange.org.