This column originally appeared in the Star Tribune, December 28, 2018

These people’s values and knowledge are vital resources, but as recent examples show, they remain underappreciated and underutilized. 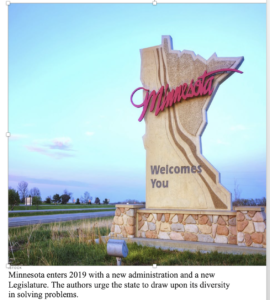 Minnesota enters 2019 with a new administration and a new Legislature. The authors urge the state to draw upon its diversity in solving problems.

While we respect the decades and insights that Star Tribune columnist Lori Sturdivant has contributed to Minnesota, we were disappointed by the way that she ignored values of those who lived here before the immigrants she praised in her Dec 23 column (“A glance back, and glimpse of state’s future”).

Her omission is sadly similar to a recent, unfortunate Minnesota House DFL decision and a recent Star Tribune news article.

This year, Minnesotans wisely elected more diverse leaders. Will their expertise be recognized and used to help solve problems? Minnesota’s progress depends in part on a greater appreciation of, and use of the values, knowledge and insights of American Indians and people of color.

Let’s begin with Sturdevant’s column. She wrote that “it was New Englanders, arriving en masse in the 1850s, who gave Minnesota its enduring civic character.”

While immigrants did contribute to Minnesota, they also were living out the concept of “Manifest Destiny,” as imposed upon the peoples of the Western Hemisphere. It’s found in the command in Genesis 1:28 “to rule over the fish in the sea and the birds in the sky and over every living creature that moves on the ground.” Manifest Destiny was used as a subtle, and sometimes not-so-subtle, justification by which non-Christians could be colonized.

American Indians did not try to control nature. They lived in harmony with it. In this holistic way, they had respect and reverence for all natural things like earth, air, water, birds, animals. etc. This is much different from the model of Manifest Destiny where European values promoted dominion over the natural world.

Increasing awareness about climate change has validated American Indian values. Minnesota’s progress depends in part on embracing the American Indian approach to living in harmony with the Earth.

For centuries, American Indians also have valued learning by actual experience in the world, serving others, and the mentoring of youngsters by seniors. Every student should have these opportunities.

Here are two additional recent examples of ignoring, rather than appreciating, expertise developed by people of color.

Unfortunately, Minnesota has one of the nation’s largest achievement gaps between whites and American Indians and people of color. One of Minnesota’s finest resources for solutions is the Minnesota Education Equity Partnership, directed by Rep. Carlos Mariani, DFL-St. Paul. Mariani is widely respected, not only in Minnesota but throughout the country. He previously chaired the Minnesota House K-12 Education Policy Committee.

Yet when the new DFL leadership of the House selected leaders for the critical K-12 funding and policy committees, Mariani was passed over. This despite the fact that he has 10 to 20 years more legislative seniority than the representatives named as chairs of those committees.

Many Minnesotans were shocked by the DFL decision to appoint Mariani the chair of the Public Safety and Criminal Justice Reform Committee, rather than what his preference and expertise warrant.

While Mariani will undoubtedly bring the same passion and commitment to the Criminal Justice Reform Committee that he has brought to education, Minnesota’s public school policies and funding will miss his expertise.

Finally, Mariani was not mentioned, though he has greater seniority than three of the five cited, when a Star Tribune article listed five “senior members” who were named chairs (“Minnesota House Democrats announce new committees and their leaders,” Nov. 21).

The questions facing Minnesotans go well beyond a newspaper column, a news report or the House DFL decision.

Gaps between races are much smaller in some states than in Minnesota. Our institutions and administrators must be accountable for failures to reduce racial disparities.

As 2019 begins with a new administration, a new Legislature, and continuing media coverage,

If this is not done, we are doomed to repeat the failures of the past.