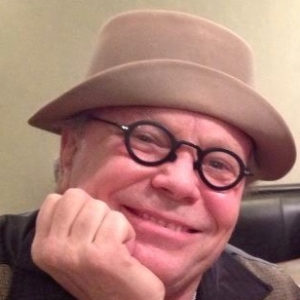 I learned how to juggle and unicycle in the hallways of St Paul Open School, where I attended high school. It was the first publicly funded Freedom School, which had been recently springing up across the country.

My junior high years between 1968 and 1971 had been a living nightmare. In 1969, I started growing my hair long.  I was thirteen years old.  Walking through the halls with shoulder-length hair made me a mark.  One gang of boys would threaten to follow me home and shave my head, leaving only a peace sign on top.

Throughout my childhood, my mother shunned the services of a professional barber, and instead cut my hair at home. A job she never got very good at. In the early years she simply gave me a buzz-cut, using large brown electric hair clippers with an assortment of snap-on combs of various thicknesses. I always pleaded for her to use the thickest one to best shield my scalp from its sharp steely teeth.

In the mid-1960s, l talked my mom into giving me a Beatles style cut.  She started by sorting through her set of bright colored Pyrex mixing bowls to find the right size. Then she put it on my head to guide her scissors. Finally, she cleaned up the back with her electric clippers, leaving my neck looking like a plucked chicken.

In summer of 1971, I’d been free from my mom’s hair clippers for almost two-years, except for once in 1970 when she haplessly tried to give me a “slight” trim the night before picture day at school. Evidence of the butchered haircut still hung proudly on the living-room wall that summer.  Threats against my long hair escalated in my East St Paul neighborhood. Rumors were circulating that my initiation on the first day was to jump me on the way to school and spray my head with Nair®, a product designed to dissolve unwanted body hair on contact.

At the end of the summer, my mother told me about a new experimental school starting that fall called, Saint Paul Open School. I jumped at the chance to go. I already had a Billy Jack hat, which was a wide-brimmed black felt hat with a beaded headband.  Billy Jack was the main character of a movie by the same name released that summer.  Billy was an American Indian and Green Beret Vietnam War Vet, who was the defender of the same kind of Hippie Free School that my mom was offering to enroll me in that fall.

St Paul Public Schools rented an old warehouse for our building, just one-week before the school year was starting.  Because of this tight deadline, it was chaos behind the scenes. We were all notified to assemble in a downtown auditorium at the old St Paul T.V.I., until our school building was ready.

Wearing my Billy Jack hat and fringed buckskin jacket, I entered the auditorium with 500 other chattering children, ranging from Kindergarten to 12th grade. Boys of all ages had long hair like mine. We were all part of a brave new social experiment.

What I remember clearly was Vice Principal, David Legg walking to the podium with his signature limp.  David was from England.  All of the teachers were on a first name bases, even the Principle and Vice Principle. With his thick accent David announced, “At this school there ar’ no grade levels.”

We cheered in one voice, as the barriers between us vanished.

David paused for dramatic effect before declaring, “At this school, there ar’ no grades.”

All of us erupted with joy, realizing without report cards we were no longer accountable to our parents.

With master showmanship, David waited for the perfect moment before shouting, “At this school there ar’ no rules!”

The auditorium filled with an ear-splitting cacophony of 500 young minds exploding. For the first time in our lives we were truly free.

The next Monday our school building was ready to open its doors. Imagine 500 kids entering a cavernous three-story warehouse with psychedelic painted walls at a full run, and not stopping.  The teachers complained of ringing ears and backaches that night. They spent their first day snatching slow moving children from the herd and hunching over a math or science book for a few minutes, until the call of freedom distracted each child back into the intoxicating chaos of unbridled play.

I met my best friend that day. Ted Pirsig, was a lanky, longhaired boy who pulled me aside in the gym to play handball.  We were bouncing a tennis ball against the brightly colored radiator covers that ran the length of the building.

Ted missed my return volley.  After retrieving the ball he turned to me and said, “Normally it would be your turn to serve, but because there are no rules at St Paul Open School, that only applies on Tuesday.”

We went on to have a lovely afternoon making up our own rules wherever we wandered. At the time Ted’s father Robert Pirsig was in the middle of writing the groundbreaking, Zen and the Art of Motorcycle Maintenance, a book that changed my generation.

Ted Pirsig and I both learned to ride the unicycle at Open School.  The lockers in the hall outside the gym were the perfect distance apart to practice precariously balancing on one-wheel, while slowly inching down the long hallway.  I was the one who caught the performing bug.  When I learned how to also juggle, a world of possibilities opened up, blossoming into a lifetime career. After graduation I sought out professional training in mime, magic, and the circus arts. 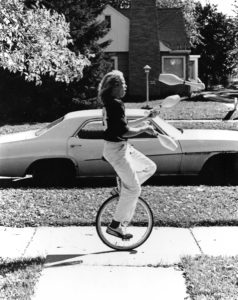 Attending a school without rules provided the freedom to imagine the impossible. Before, my public school experience was more about indoctrination than education.  Open School freed me from all previous programing and inspired me onto a path towards a lifelong love of learning.

Lloyd Brant is part of a popular husband and wife comedy team called, Theatre of Fools, with Rosie Cole.  For over three-decades they’ve toured their unique brand of absurd theatrics to festivals and theaters across the USA. Lloyd also founded with Rosie the very first circus arts training program in Minnesota, at City of Lakes Waldorf School (CLWS).  They’re considered pioneers within the international Waldorf School movement for establishing one of the first Waldorf Circus Programs in the world. In 2012, Lloyd and Rosie were honored to receive the Minnesota Private and Independent Education STORY AWARD for their pioneering CLWS Circus Arts Program.

« A first generation college student – SPOS alumni » Who I have become, and the Open School’s influence