The column below appeared in a number of ECM newspapers during late April and early May, 2018

America at its best. That’s what I thought after meeting Mrs. Bobbie Coles, an educator, and Mrs. Virginia Ali, an entrepreneur. A lot of news out of Washington, D.C., where they live, is discouraging. But these two have a lot to teach us. And if, as many Minnesotans do, you visit Washington, they’re easy to find.

In a gentle, unintended way, Coles embarrassed me. After teaching American history for more than a decade, how could I not know several important facts about the Civil War, including:

—More than 200,000 African-Americans fought for the North.

—President Abraham Lincoln wrote, “Without the military help of the black freedmen, the war against the South could not have been won.”

After a career in wholesale/retail marketing and receiving extensive training, Coles is devoting her life to helping people learn about the vital roles that African-Americans had and have in the U.S. She’s a volunteer docent at the wonderful (and free) Washington, D.C., African American Civil War Museum and at the nearby home of Frederick Douglass. Coles has ancestors who fought in the Civil War. (More information about the museum is here: https://bit.ly/2H5ZdvU.) 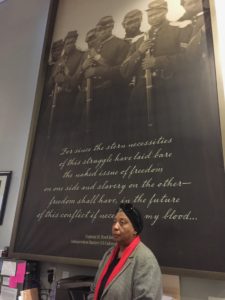 Hari Jones, the museum’s assistant director and curator, has appeared many times on C-SPAN. He told me that a key role of the museum is “to tell the story of accomplishments. For example, pay was equalized between black and white Civil War soldiers after generals described their heroism.” 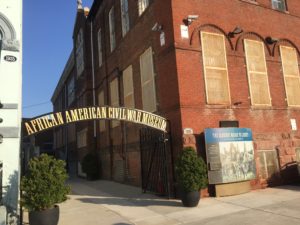 Coles is also working with others to encourage changes at Fort Pillow, Tennessee. This was the site of a horrendous 1864 massacre of African-Americans who had surrendered to Confederate troops. A congressional investigation found that “rebels commenced an indiscriminate slaughter. … Men, women and even children, wherever found, were deliberately shot down, beaten and hacked with sabres (sic).” (That report in national archives is here: https://bit.ly/2qEr77i.)

A bill, H.R. 5209, introduced earlier this year by Congressman Bobby Rush, Illinois, requests efforts to “evaluate the national significance of the park and …determine the suitability and feasibility of designating it a unit of the National Historic Park System,” with the goal of presenting a more accurate view of what happened. (Read the text of the bill at https://bit.ly/2JNSbK1.) ;

According to Coles and others, the battle currently is being presented to battlefield visitors as a great Confederate victory. (Please see picture above with Confederate flag being flown in a recent “enactment.”)

Yet the Congressional report concluded “more than 300 people were murdered in cold blood.” The differing descriptions of history create tension; an account of what happened when a racially diverse group of people went to Fort Pillow to “seek Christian reconciliation” and perform music and a play on the 150th anniversary of the massacre is found here: https://bit.ly/2J5tZSc.

Given Minnesota’s key role at Gettysburg, I hope several Minnesota members of Congress will co-sponsor this effort. We need to honor courage and acknowledge murder.

While Coles helps us understand American history, Ali is making history. Sixty years ago, she and her husband, Ben, started a restaurant that has won a vast array of awards (see that list at https://bit.ly/2J59vZR). It’s just two blocks from the African American Civil War Museum. Through recession, riots and urban renewal, Ben’s Chili Bowl has served families, residents and visitors to Washington.

Its walls are covered with images of famous people who’ve dined there, though the food is very reasonably priced. Former President Barack Obama recently praised the restaurant for its outreach to the hungry and homeless.

Ali, now 84, comes to the restaurant almost every day. We met; what a lively, friendly person! It’s easy to see why her restaurant has survived — and now has opened several additional restaurants in the D.C. area. 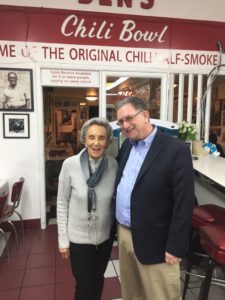 Virginia Ali and Bobbie Coles are passionate, persistent, positive people. You can find them an easy, safe, 10-minute Metro subway ride from the more well-known Capitol Mall. Whether you visit online or in person, they and their stories have a lot to offer.