Recently I’ve heard and read some of the most powerful student essays I’ve encountered over more than 45 years of work with young people. Students presented them at a statewide conference attracting almost 300 students sponsored by the Minnesota Association of Alternative Programs.

Quietly, with little attention and sometimes with much less respect than is deserved, a portion of Minnesota public education has grown from serving about 4,000 students in 1988 to more than 162,000 students, full- and part-time.

According to Mary Barrie at the Minnesota Department of Education, in 2013-14 alternative schools served about 17 percent of Minnesota public school students. (More information about alternative programs is at http://bit.ly/1JGUTKr.)

One of those students is Jessenia Kalstad. She became depressed when her father died. She planned to drop out, but her mother insisted she stay in school somewhere. Kalstad entered Ivan Sand Community High School in Elk River. 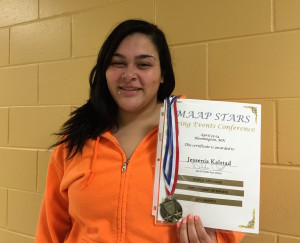 She found teachers who give “emotional, verbal and any kind of support you need. … I now know what it’s like not to give up on someone even when they give up on themself. I can’t count how many times I’ve said screw it, but the teachers are right over my shoulder ready to help me. … Everything I’ve been through has helped me help others, and it’s also showed me what I might be good at when I graduate high school. … I was half a year behind and now I’m graduating with my class. … I’ve learned that you have to put everything you have into what you want because success doesn’t come to those who sit around and wait.”

She concluded, “Triumph over tragedy is what it comes down to because what you go through doesn’t define you.”

Aaron Fredricks, senior at Northwest Passage High School, a charter public school in Coon Rapids, wrote that he was “drifting along” in traditional schools: “Letting others insult and spread rumors about me, expecting it all to get better one day. I was pulled down again and again with despair. … I even was led to bring others down to feel better, but I wasn’t proud, I hated myself. I was not the Aaron I wanted to be.”

Then he enrolled at Northwest Passage and helped plan the statewide conference MAAP STARS, where students share information about their lives. Aaron wrote: “MAAP STARS turned out to be the perfect fit. I was inspired by the many students and staff who all were participating in the program, who had just as much trouble in their lives as I did. MAAP STARS gave me the courage to keep going, to find myself and lead on. “

Lori Crever is an officer for a major Twin Cities bank who served as one of the judges at the convention. Though she was a high school valedictorian, her son had multiple issues. He attended 19 schools and programs before he enrolled in Jennings Community Learning Center in St. Paul. She recalled, “Gradually his problems evaporated as he attended the school.”

The combination of an individual program, faculty patience, identifying a strong interest (filmmaking) and giving him the opportunity to pursue that interest, and being allowed to take college classes via Post Secondary Enrollment Options produced “a transformation.” Her son has graduated and is attending the film school at the Santa Fe University of Art and Design.

Sam Roth, an alternative school student from Montevideo, wrote: “For a large portion of my life I felt like no one noticed anything I did and I was at a point of not really caring either. That all changed when I chose to attend Minnesota Valley Area Learning Center in Montevideo.” Roth quoted John Lennon: “When you do something noble and beautiful and nobody noticed, do not be sad. For the sun every morning is a beautiful spectacle and yet most of the audience still sleeps.”

Alternative schools vary in quality. They don’t work well for every youngster. Many people don’t notice these schools. But for some students, they help produce “triumph over tragedy.”