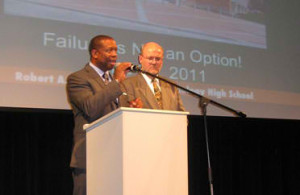 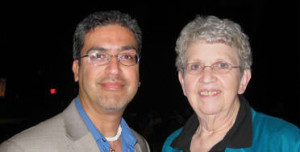 ABC Nightly News named Smith its “Person Of The Week ” earlier this year. That’s because Smith, a Taft graduate, and then as Taft principal beginning in 2000, was able to work with faculty, families and Cincinnati Bell to help the school move from one of the worst in Ohio (measured by graduation rate, which was less than 25 percent when he arrived), to more than 95 percent. This helped the school earn national “Blue Ribbon” status from the US Department of Education.

Smith and his team established a core philosophy “Failure is not an option” upon which all else in their program was built. The school developed a technology focus and a strong partnership with Cincinnati Bell which continues to provide tutors, cell phones, computers, scholarships and internships. Cincinnati Bell also set up an academic incentive program in which it gives free laptops and cell phones to all juniors and seniors who earn and maintain a 3.3 grade point average. To date no student has needed to return their free laptop or cell phone. Robert A Taft Information Technology High School is also one of the few technology schools in the country that has no test score or academic admission requirements for prospective students.

The presentation was followed by a full day workshop at Macalester College involving educators from the St. Paul and Minneapolis Public Schools, along with educators from several local charter public schools. Funds to bring Smith and Turner to Minneapolis/St. Paul were provided by Cargill and the Minnesota Department of Education.

« Regardless of shutdown, state funds should continue going to public schools » A Mirror, a Choice and A Question for July 4